Putting on Some Weight

No, this is not about the weight so many of us have gained during the COVID pandemic. Rather, it is about the newest addition to my audio system, the VPI “Fatboy” tonearm.

I first encountered a Fatboy when Merrill Wettasinghe and I shared a room at the 2017 AXPONA. Our friend and colleague Mat Weisfeld, President of VPI, provided us with a belt-drive Avenger turntable with a new, prototype arm. The arm had a wider diameter than the standard arm, and was 3-D printed. Not yet having an official designation, Mat affectionately called it the Fatboy, likely not realizing the name would stick. Our room received rave reviews, so all was good.

At the time of the show, I owned a turntable from a different manufacturer (now no longer in business). A year or so after the show I decided it was time to upgrade my turntable; there was no doubt in my mind that it would be a VPI. I was undecided as to which model to get but after discussions with Mat, I decided to go with the top of the Avenger line, the Avenger Reference. The Avenger Reference has a rim drive, and a magnetic platter. I have long been a fan of rim drive ‘tables, because generally speaking (there are of course exceptions), rim drives — along with idler wheel drives and direct drives — excel in dynamics. The downside of such designs has been increased vibration transmitted to the platter. VPI addresses this by using very high quality motors, but also by the optional magnetic platter. More specifically, there are two platters, both of which contain magnets. The magnets are on top of the drive platter, and on the bottom of the driven platter (upon which the record sits). The lower platter (i.e., the drive platter) rotates the upper platter (i.e., the driven platter) by attraction between the magnets. Because there is no direct contact between the two platters, any vibration in the lower platter is not transmitted to the upper platter.

At the time I got my ‘table, the Fatboy tonearms were out of stock, so VPI founder Harry Weisfeld brought a JWM arm, with a promise to upgrade my ‘table to the Fat Boy soon as they became available. Between work, shows, events, new babies (Mat’s, not mine), we never got around to swapping arms. Not until earlier this week that is, when Harry came by to drop off the Fat Boy (along with some new footers).

Since the time since I first heard the Fatboy prototype, it has undergone a number of changes. First, it now has a full length thin wall copper tube inside for shielding, rigidity, and grounding. Second, the paint job is done by drying the 3D arm tube, sanding the digital stairstep off, sealing the outside to prevent moisture, then finishing with black lacquer paint in 3 coats with sanding between coats. To put the third change in perspective, I’ll begin with an anecdote. Some time after AXPONA, Harry and Mat visited me to hear my system.  Harry brought a thumb drive with him (as mentioned in my previous article “I Know What I Hear,” Harry very much enjoys digital music).  Harry explained that it contained two files of the same song, and wanted to know what — if anything — I heard different between them.  He provided no details as to how the tracks actually differed. After listening for a few minutes, I told him that one track sounded somewhat “airier,” while the other sound a bit more “solid.” Mat — who also did not know the origin of the tracks — concurred with my assessment.  Harry then explained the two tracks were recorded identically, the sole difference being that one was made with the VPI Fatboy gimbal arm, the other with the VPI unipivot version (both of course, with the same cartridge). As you likely guessed — and in keeping with “conventional wisdom” — the airier sound was the unipivot, the more grounded one the gimbal. Though both were excellent, the gimbal was more to my liking, and I let Harry know that would be my choice. (As an aside, and as discussed in my previous article, it is fascinating that such subtle distinctions are audible).

Now back to the third change. Harry was aware that — again, as is generally true — the unipivot arm did not track quite as well as the gimbal, though he of course liked other aspects of the design (as he does the gimbal — that’s why VPI offers both models). Never one to rest on his laurels, and possessing of an incredibly creative mind, he came up with an idea that would, he believed, minimize the downside of the unipivot design, while preserving its good points. Specifically, he added to the side an additional pivot that slides along a stainless steel plate, which is polished to mirror-like smoothness. It bears just enough weight to increase the stability of the main pivot, but not so much as to decrease its “responsiveness.”  VPI refers to this design — quite logically — as dual-pivot. It reminds me of a motorcycle with a sidecar — more agile than a 4-wheel car, but with less propensity to tip over than a traditional motorcycle. After hearing the dual-pivot at the home of my friend and colleague Isaac Rivera of Living Acoustics, I decided to get it, rather than the gimbal. 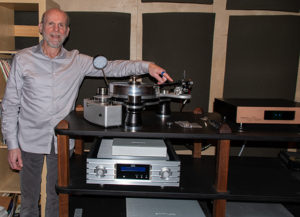 Based on all the listening I had done to the Fatboy at shows, at the VPI House, and at Living Acoustics, I fully expected it to be a significant step up (pun unintended…) from the previous arm, but I tempered my excitement until I could hear it in my own system. Having now done so, it is clear that the Fatboy is everything I had hoped it would be, and the dual-pivot arm does indeed bring the best of unipivot and gimbal designs. (My associated equipment is as follows: Ortofon A95 cartridge (now discontinued), Merrill Audio Jens phonostage, Merrill Audio Christine Reference preamplifier, Merrill Audio Element 116 monoblock amplifiers, and Genesis Maestro loudspeakers.) The most notable difference as compared to my previous VPI arm is in the bass, which is rock-solid. Double basses, and the lower registers of the piano, have proper weight and body, yet the entire presentation has an openness and spaciousness that are hallmarks of the VPI unipivot arms. The combination of the dual-pivot Fatboy, and rim drive and magnetic platter of the Avenger Reference, provides incredible musical flow, a low noise floor with excellent musical detail, proper decay (a trait that I find missing in many systems), and image stability that is frequency-independent.

Though I am late to the game, I can now add my voice to those singing the praises of the VPI Fatboy 3-D printed tonearm. As good as VPI’s other arms are, the Fatboy is a major advance, and I enthusiastically recommend it to anyone looking to upgrade their vinyl playback system.

My next planned upgrade is a VPI direct-drive ‘table, which I hope will happen within the coming year. Stay tuned.

Last but not least, I want to express my sincerest thanks to Harry for doing the initial setup, and to Isaac who came out to NJ to give it the whole nine yards treatment (including the use of a USB microscope). I am deeply indebted to both of them.